This article was sponsored by Codiscope. Thank you for supporting the sponsors who make SitePoint possible.

I used to play a game called You Don’t Know Jack. It’s a trivia game, set as a game show, in which it’s fun to lose. Upon giving an incorrect answer, the player is treated to a witty and irreverent reprimand from the game’s host.

Recently, I was asked to write about Jacks. I’d never heard of it before, but it was immediately interesting to me. You see, there aren’t many services that claim to help you as you learn about how to code securely. Jacks wants to be that service. Almost like a coach. That never sleeps. And costs nothing.

Unlike the trivia game, it’s more forgiving. That’s great when you really don’t know what you’re doing — as I found out when I decided to learn a new web framework.

I’ve written many little NodeJS applications, and I’ve often found Express to be just enough for my web application needs. But I’ve also wondered how best to structure a much larger application. There are opinionated options, like Adonis, but I’m already quite familiar with it. What new thing could I learn, while also kicking Jacks’ tires?

And then I saw mention of Hapi on Jacks’ home page .

I opened my terminal, made a new project folder, and installed Hapi:

You can also install Hapi using NPM. I’m just a sucker for trends, and Yarn is pretty darn fast!

According to the docs, making a Hapi application is as easy as:

This is from index.js.

If you’ve used Express, this should look somewhat familiar to you. I’ve created a new HTTP server, with a single route. When a browser requests /, this route will reply with hello world:

The next step was to connect my Github account to Jacks. Creating a Jacks account was rather effortless, and free. First I set up a new project: 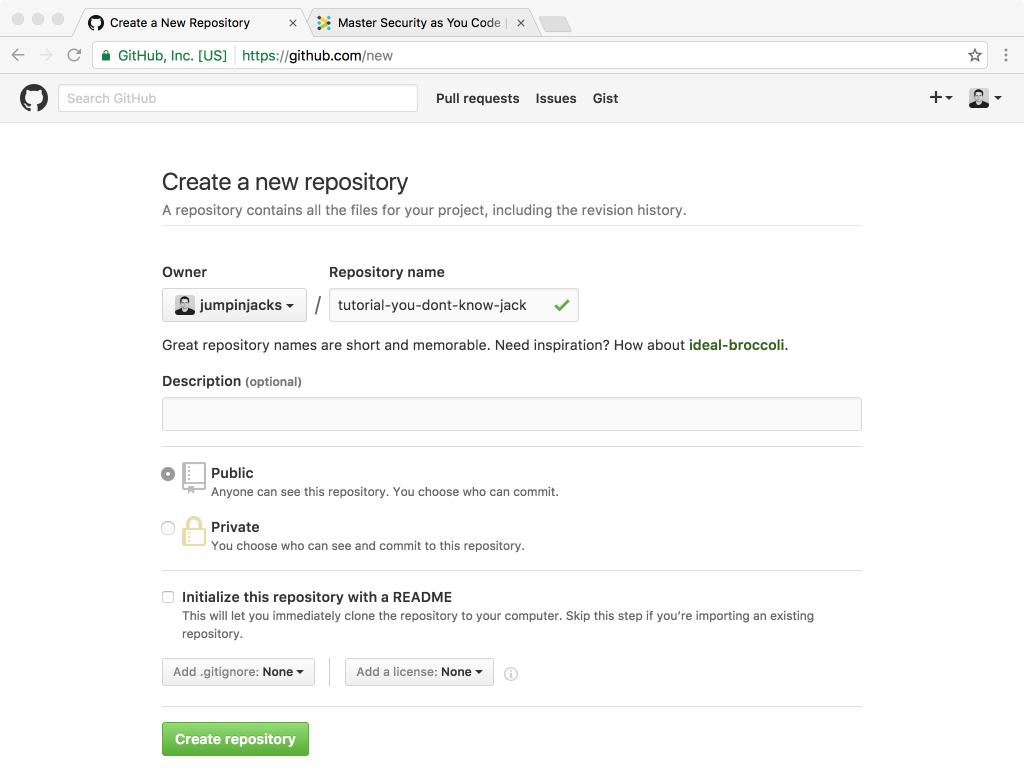 …and then I connected my Github account (and the project repository) to Jacks:

This all took about 2 minutes, from start to finish.

Now it was time to see just how helpful Jacks could be. I got together a list of common web app security mistakes, and decided to try a few, to see what Jacks would say (and how it could teach me to be better at my job).

At this point, I wasn’t expecting Jacks to have any recommendations for me yet. But, when I went back to the interface, I saw the first bit of advice it had to offer me: 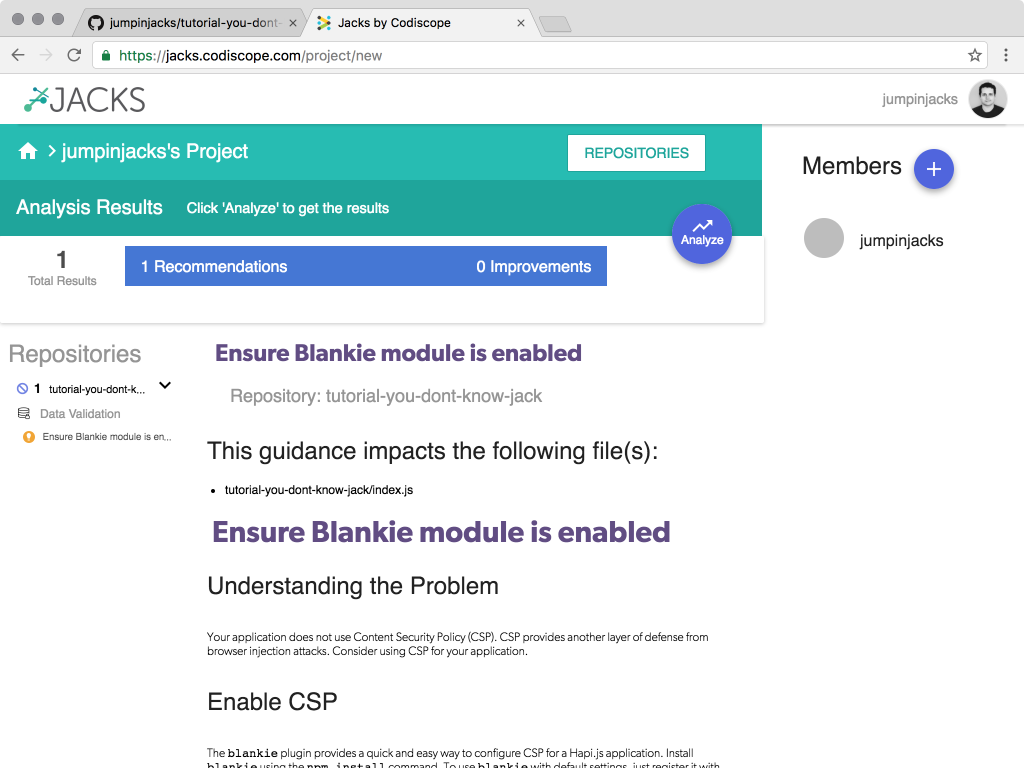 It took a bit of searching for a good explanation, but I finally found one at Content Security Policy CSP Reference & Examples. CSP is essentially a way of restricting where HTTP resources may be loaded from. This is great because malicious users who might have been able to inject custom scripts and/or images wouldn’t be able to exploit those vulnerabilities as easily.

Jacks also provided example code for how to add Blankie to my server script:

This is from index.js.

I needed to install Blankie and Scooter, with yarn add blankie and yarn add scooter, for this code to work. These add CSP headers to each request: 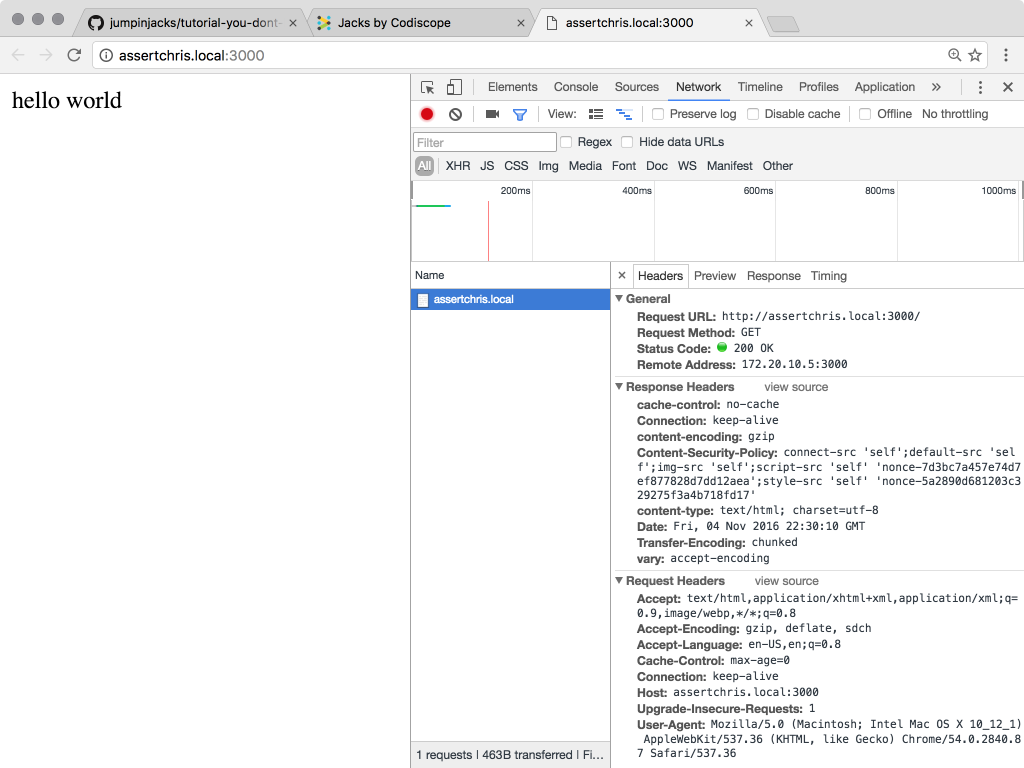 Sure enough, as soon as I committed that code to the project, Jacks noticed it and marked the recommendation as resolved.

A common security pitfall is enabling (or rather not appropriately disabling) directory listings in web apps. There’s a popular Hapi plugin, called Inert, which enables static file serving and directory listings. It’s not uncommon to enable these features, so that’s what I tried to do: