Form Maker is the simple name of a not so simple plugin from the WordPress forge WebDorado. Form Maker lets you build flexible forms that also work on mobile devices via drag and drop.

Form Maker, in its basic version, is a free plugin in active development. The current version on the market is 1.10.7. The compatibility of the plugin with the most recent WordPress edition is confirmed. The minimum requirements for Form Maker are WordPress version 3 and up, a PHP in version 5 and up, as well as a MySQL starting from version 5.

Here’s where to find Form Maker in the plugin repository:

Form Maker’s not so secret power is that it lets you build any form within a simple drag and drop interface. Although the creation is so simple, the form’s functionality can be elaborate. For instance, Form Maker does not only allow you to send data, but it also makes it possible to directly write this data into a database. All form settings that you already know from PHP are available as dialogue options for simple configuration.

Even though this may sound flat, the creation of a new form is child’s play. After the installation of the plugin, which can either be done via FTP, or via install plugins in the backend of your WordPress by searching for WebDorado Forms, you’ll find another menu item in your backend navigation.

The Form Maker in the WordPress Backend

Under the menu item Form Maker, you’ll find a list of your forms with their respective WordPress shortcodes, as well as their PHP functions if you happen to want to integrate them somewhere where shortcodes don’t work. The yellow shift symbol opens a form, allowing you to edit it. 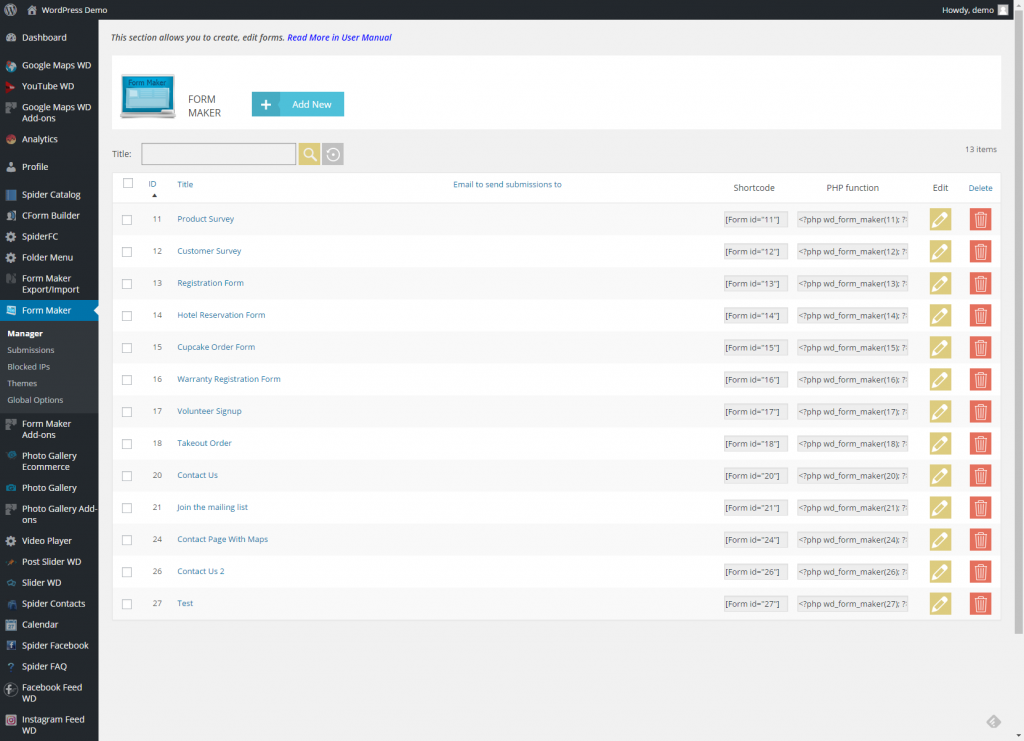 The blue plus button in the top left allows for the creation of a completely new form. Of course, forms can also be deleted from this list. If you happen to have such a massive amount of different forms, you may be happy that you can even find your forms via search terms. The average user probably would not lose track off his forms even without this function. WebDorado calls this overview the Manager.

Under the menu item Submissions, you access the database and have it display its entries, filtered by form. To do so, you have to configure the database storage for the respective form, because otherwise, Form Maker will only send to the accordingly defined email address.

The item Blocked IPs allows you to enter IP addresses that you want to block from filling in your forms. You’ll realize pretty quickly that there are legitimate application cases for this method.

Under Themes, you’ll find a bunch of pre-defined designs which turn out to be customized CSS files, which affect the look of your forms. If you know CSS, you can not only alter existing themes, but also create new ones. The creation of new themes is not visually supported in any way. You have to write pure CSS in a pure editor window.

By clicking on one of the grey stars in the theme overview, it will turn yellow, indicating that this theme will be used as the default for future forms. Of course, you still get to select a different theme in the individual form, but you’re not forced to do that if you have chosen a fitting default setting.

Last but not least, Global Options is where you find the input option for your Recaptcha keys, when working with this antispam method. This is also where you lodge the field delimiter for the CSV export of your form data.

Creating a Form With Form Maker

As I have described already, forms can be edited, or created from scratch in the Manager. If you work somewhat like I do, you may only want to create an entirely new form if there is absolutely no other way around it. 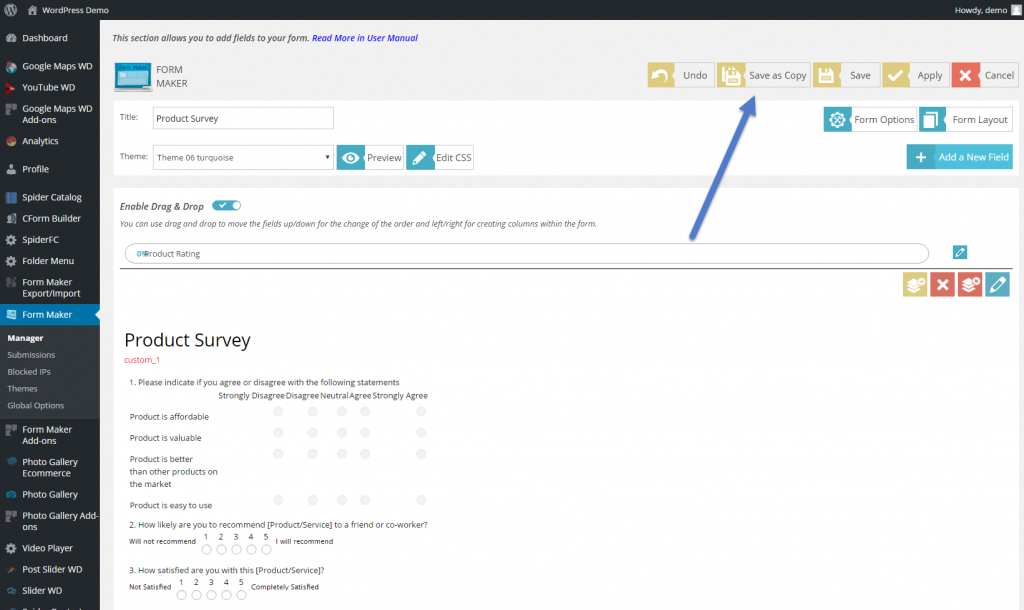 Thus, it’s a good thing that we are able to open existing forms to edit them, and then click the top right button labeled Save as Copy. Here, the entire layout remains, but entered content doesn’t.

If you have turned off the drag and drop functionality, you won’t simply move around form fields with the mouse anymore. Instead, you’ll now find a small editing bar on each form field, letting you change the position, as well as other parameters. 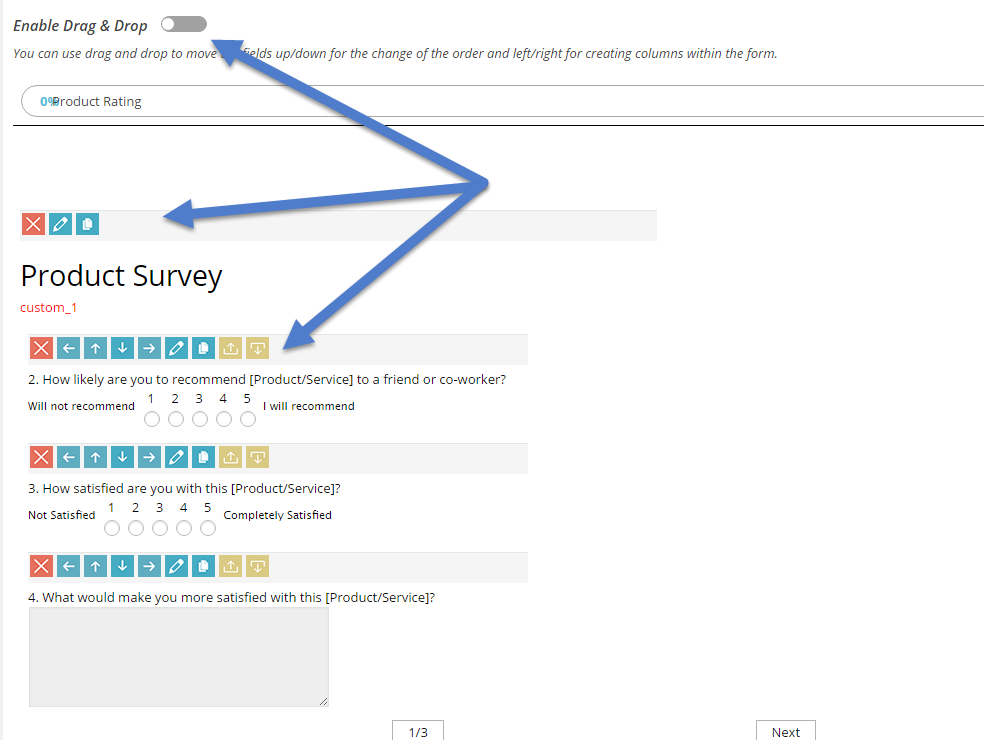 From this toolbar, especially the small, plain, yellow pen packs a punch. Clicking the symbol opens an editing window, within which you have full access to all parameters of the selected form field. In this rather complex example, the goal is to set up a rating scale for a product rating. 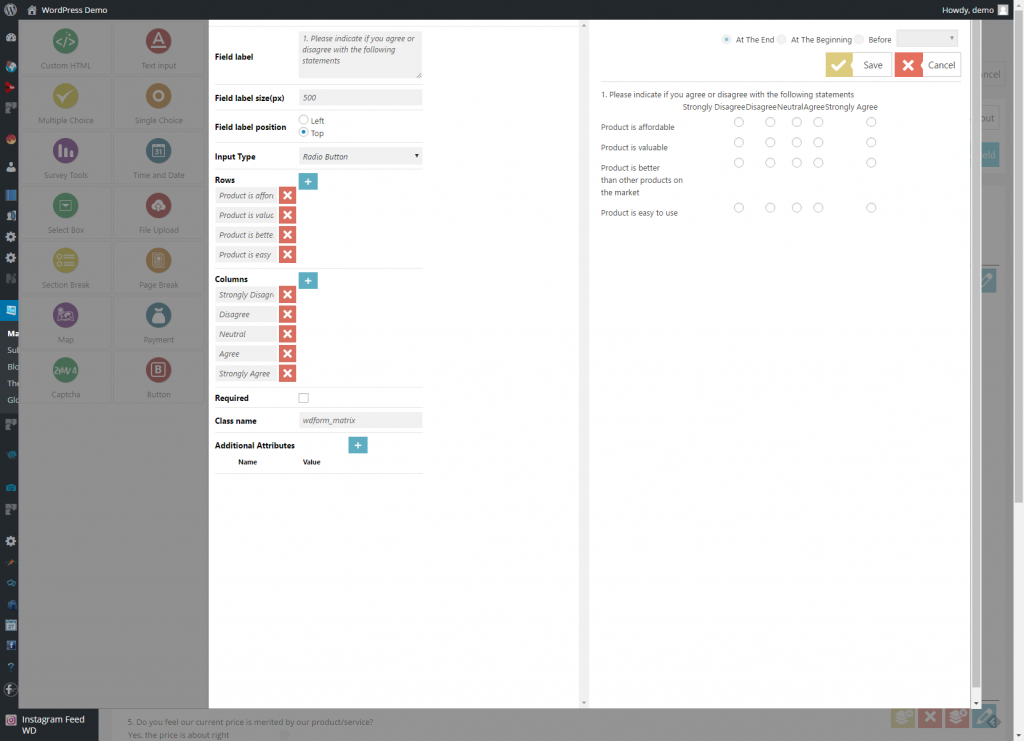 The process is not fully self-explanatory or intuitive, so it’s great that WebDorado has created this step by step guide to their plugin.

On the top right of the editor, you’ll find the item Form Options. Here is where you lodge the logic behind the form. A simple Paypal integration (paid) is available, for example. Program specific functions using JavaScript, and even conditional logic can be created with just a few mouse clicks. 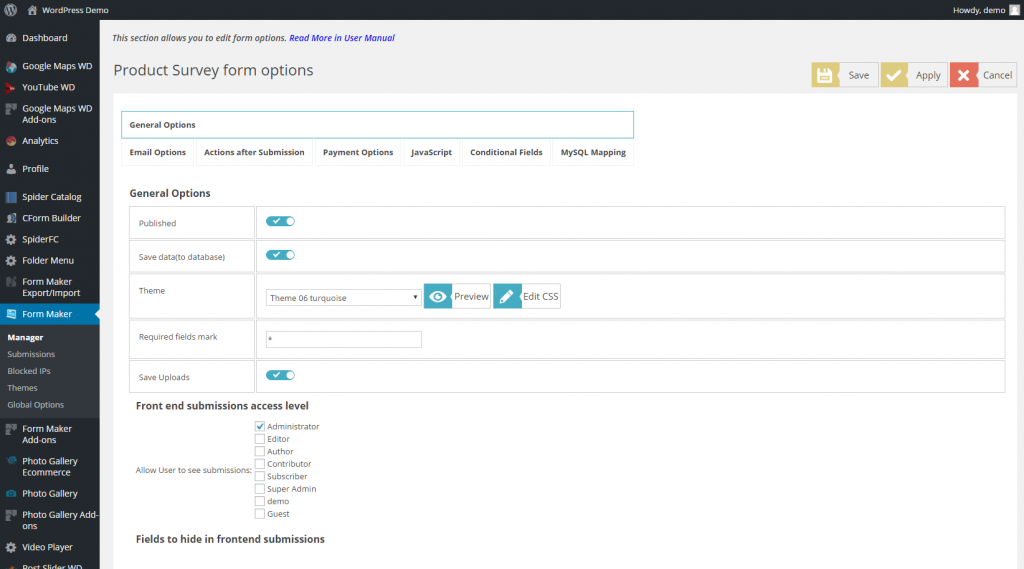 Conditional logic means only displaying certain form contents if certain other form field were filled in a specific way. For instance, after the field male/female, the field How many pairs of shoes do you have? would not have to be displayed anymore, if the previous field was answered with female.

Form Maker is available in four flavors. The free variant comes without any support, and a limit to seven fields per form. At least, you can create an unlimited amount of forms. You also have to forgo the Paypal integration, the file upload, as well as several other features.

Starting from Personal, you get the full feature set. The differences are related to the support for domains, as well as the support duration. For a one-time payment of 30 USD, Personal nets you six months of support for a domain. The Business plan gets you one year of support on three domains for a one-time cost of 45 USD, and the Developer plan offers twelve months of support on an unlimited amount of domains for 60 USD.

Considering the very reasonable prices, I’d definitely recommend the developer plan for web developers, while ambitioned single users should go for the business plan, simply because the support duration is twice as long as it is for the personal tariff.

Conclusion: Flexible Form Plugin Doesn’t Leave Much to be Desired

Form Maker is a premium WordPress plugin that is definitely worth its price. Even the highest price of 60 USD wouldn’t even get you a plumber for an hour, and if you go to Luigi’s around the corner with three people, that probably wouldn’t be enough either, and in the end, you’d only be full once.

If I had to criticize something, I’d probably mention the not fully matured design of the plugin. In some places, it does seem a bit casual, not very contemporary, but it works.

It’s important to note that good CSS knowledge can significantly improve the looks of the form. The integrated themes are pretty mediocre. But all in all, Form Maker definitely earns a recommendation.

Take a look for yourself!