Last time, I began telling you the story of how I wanted to make a game. I described how I set up the async PHP server, the Laravel Mix build chain, the React front end, and WebSockets connecting all this together. Now, let me tell you about what happened when I starting building the game mechanics with this mix of React, PHP, and WebSockets…

The code for this part can be found at github.com/assertchris-tutorials/sitepoint-making-games/tree/part-2. I’ve tested it with PHP 7.1, in a recent version of Google Chrome. 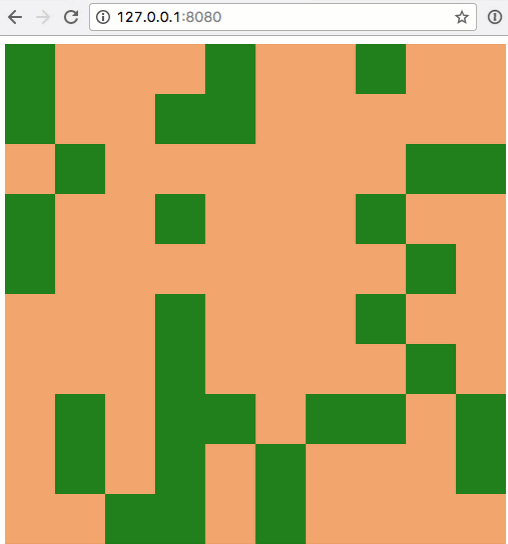 “Let’s start simple. We have a 10 by 10 grid of tiles, filled with randomly generated stuff.”

I decided to represent the farm as a Farm, and each tile as a Patch. From app/Model/FarmModel.pre:

I thought it would be a fun time to try out the class accessors macro by declaring private properties with public getters. For this I had to install pre/class-accessors (via composer require).

I then changed the socket code to allow for new farms to be created on request. From app/Socket/GameSocket.pre:

I noticed how similar this GameSocket was to the previous one I had — except, instead of broadcasting an echo, I was checking for new-farm and sending a message back only to the client that had asked.

“Perhaps it’s a good time to get less generic with the React code. I’m going to rename component.jsx to farm.jsx.”

In fact, the only other thing I changed was sending new-farm instead of hello world. Everything else was the same. I did have to change the app.jsx code though. From assets/js/app.jsx:

It was far from where I needed to be, but using these changes I could see the class accessors in action, as well as prototype a kind of request/response pattern for future WebSocket interactions. I opened the console, and saw {"farm":{"width":10,"height":10}}.

Then I created a Patch class to represent each tile. I figured this was where a lot of the game’s logic would happen. From app/Model/PatchModel.pre:

I’d need to create as many patches as there are spaces in a new Farm. I could do this as part of FarmModel construction. From app/Model/FarmModel.pre:

For each cell, I created a new PatchModel object. These were pretty simple to begin with, but they needed an element of randomness — a way to grow trees, weeds, flowers … at least to begin with. From app/Model/PatchModel.pre:

I thought I’d begin just by randomly growing a patch. This didn’t change the external state of the patch, but it did give me a way to test how they were started by the farm. From app/Model/FarmModel.pre:

There was a lot going on here. For starters, I introduced an async function keyword using a macro. You see, Amp handles the yield keyword by resolving Promises. More to the point: when Amp sees the yield keyword, it assumes what is being yielded is a Coroutine (in most cases).

I could have made the createPatches function a normal function, and just returned a Coroutine from it, but that was such a common piece of code that I might as well have created a special macro for it. At the same time, I could replace code I had made in the previous part. From helpers.pre:

Previously, I had to make a generator, and then wrap it in a new Coroutine:

I began the createPatches method as before, creating new PatchModel objects for each x and y in the grid. Then I started another loop, to call the start method on each patch. I would have done these in the same step, but I wanted my start method to be able to inspect the surrounding patches. That meant I would have to create all of them first, before working out which patches were around each other.

I also changed FarmModel to accept an onGrowth closure. The idea was that I could call that closure if a patch grew (even during the bootstrapping phase).

Each time a patch grew, I reset the $changes variable. This ensured the patches would keep growing until an entire pass of the farm yielded no changes. I also invoked the onGrowth closure. I wanted to allow onGrowth to be a normal closure, or even to return a Coroutine. That’s why I needed to make createPatches an async function.

Note: Admittedly, allowing onGrowth coroutines complicated things a bit, but I saw it as essential for allowing other async actions when a patch grew. Perhaps later I’d want to send a socket message, and I could only do that if yield worked inside onGrowth. I could only yield onGrowth if createPatches was an async function. And because createPatches was an async function, I would need to yield it inside GameSocket.

“It’s easy to get turned off by all the things that need learning when making one’s first async PHP application. Don’t give up too soon!”

The last bit of code I needed to write to check that this was all working was in GameSocket. From app/Socket/GameSocket.pre:

This was only slightly more complex than the previous code I had. I needed to provide a third parameter to the FarmModel constructor, and yield $farm->createPatches() so that each could have a chance to randomize. After that, I just needed to pass a snapshot of the patches to the socket payload.

Random patches for each farm

“What if I start each patch as dry dirt? Then I could make some patches have weeds, and others have trees …”

I set about customizing the patches. From app/Model/PatchModel.pre:

I changed the order of logic around a bit, exiting early if the patch had already been started. I also reduced the chance of growth. If neither of these early exits happened, the patch type would be changed to weed.

I could then use this type as part of the socket message payload. From app/Socket/GameSocket.pre: