How to Update Angular Projects to the Latest Version

In this article, we’ll look at how to update Angular projects to the latest version.

This article is part 6 of the SitePoint Angular 2+ Tutorial on how to create a CRUD App with the Angular CLI.

In part 1 we learned how to get our Todo application up and running and deploy it to GitHub pages. This worked just fine but, unfortunately, the whole app was crammed into a single component.

In part 2 we examined a more modular component architecture and learned how to break this single component into a structured tree of smaller components that are easier to understand, reuse and maintain.

In part 3 we updated our application to communicate with a REST API backend using RxJS and Angular’s HTTP service.

In part 4, we introduced Angular Router and learned how the router updates our application when the browser URL changes and how we can use the router to resolve data from our backend API.

Don’t worry! You don’t need to have followed part 1, 2, 3, 4 or 5 of this tutorial for 6 to make sense. You can simply grab a copy of our repo, check out the code from part 5, and use that as a starting point. This is explained in more detail below.

To start on our goal to update Angular, make sure you have the latest version of the Angular CLI installed. If you don’t, you can install it with the following command:

If you need to remove a previous version of the Angular CLI, you can:

After that, you’ll need a copy of the code from part 5. This is available on GitHub. Each article in this series has a corresponding tag in the repository so you can switch back and forth between the different states of the application.

You can think of tags like an alias to a specific commit ID. You can switch between them using git checkout. You can read more on that here.

So, to get up and running (with the latest version of the Angular CLI installed) we would do this:

Then visit http://localhost:4200/. If all’s well, you should see the working Todo app.

Update Angular: Our Plan of Attack

In this article, as we update Angular, we’ll learn the following:

By the end of this article, you’ll understand:

The Meaning of Angular Versions

To support a thriving ecosystem, Angular needs to be both stable and evolutionary.

On one hand, Angular aims to provide developers with maximum stability for mission-critical applications. On the other hand, it constantly needs to adapt and advance to support the latest changes in web technologies.

Therefore, the Angular team has decided to use a time-based release cycle with semantic versioning.

A time-based release cycle means that we can expect new versions of Angular (Angular 5, Angular 6, Angular 7, etc.) every couple of weeks or months.

Semantic versioning means that the version number of Angular allows us to predict whether or not it will break our application if we upgrade to it.

In essence, a semantic version looks like this: Major.Minor.Patch.

When a new version is released, the new version implicitly indicates the type of change that was made to the code.

The following rules are applied when a semantic version is increased:

The Angular team combines semantic versioning with a time-based release cycle to aim at:

The release schedule is not set in stone, as there may be holidays or special events, but it’s a good indicator of what we can expect in terms of upcoming versions.

You can follow the official Angular blog and the official change log to stay up to date on the latest developments.

A huge benefit of semantic versions is that we can safely update Angular applications with patch or minor releases without having to worry about breaking our applications.

But what if there’s a new major release?

We already learned that a major release can come with breaking changes. So how do we know if our existing application will break or not if we update it?

One way would be to read the official change log and go through the list of changes.

A much easier way is to use the Angular Update Guide to update Angular. You select your current version of Angular and the version you wish to upgrade to and the application tells you the exact steps you need to take:

For our Angular Todo application, we wish to upgrade from Angular 4.0 to Angular 5.0.

Let’s select app complexity level Advanced so we see all the possible measures we need to take: 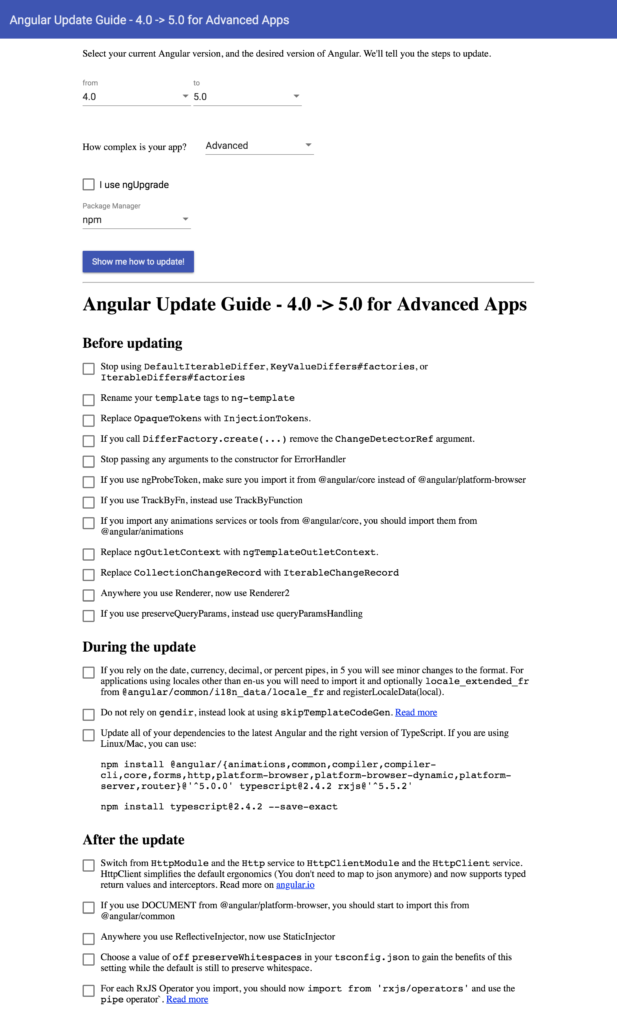 We get a complete overview of all the steps we need to take to update our application.

How sweet is that!

The Before Updating list contains 12 items. None of the items apply to our Angular Todo application, so we can safely proceed to the next step.

From the During the Update list, only the last item applies to our application. We need to update our dependencies, so let’s run the proposed commands in the root of our project:

Because we updated our Angular CLI to the latest version in the Up and Running section, we also update our local version:

To verify that our application runs correctly, we run:

Continue reading %How to Update Angular Projects to the Latest Version%