Authentication with Angular and Auth0

This article was originally published on the Auth0.com blog, and is republished here with permission.

In this tutorial, we’re going to build an Angular application and add login functionality using token-based authentication with Auth0.

You can check out the completed code example from our GitHub repo.

AngularJS 1.x was highly regarded as a robust framework for building single-page applications (SPAs). It did a lot of things well, fell short on some, but overall allowed developers to quickly build powerful applications.

While AngularJS (1.x) is a framework, Angular is an entire platform for building modern applications. Alongside the core Angular library, the platform ships with a powerful command line interface (CLI) called Angular CLI that allows developers to easily scaffold their applications as well as control the build system. Angular Platform Server brings server-side rendering to Angular applications. Angular Material is the official implementation of Google’s Material Design, which allows developers to build beautiful applications with ease. 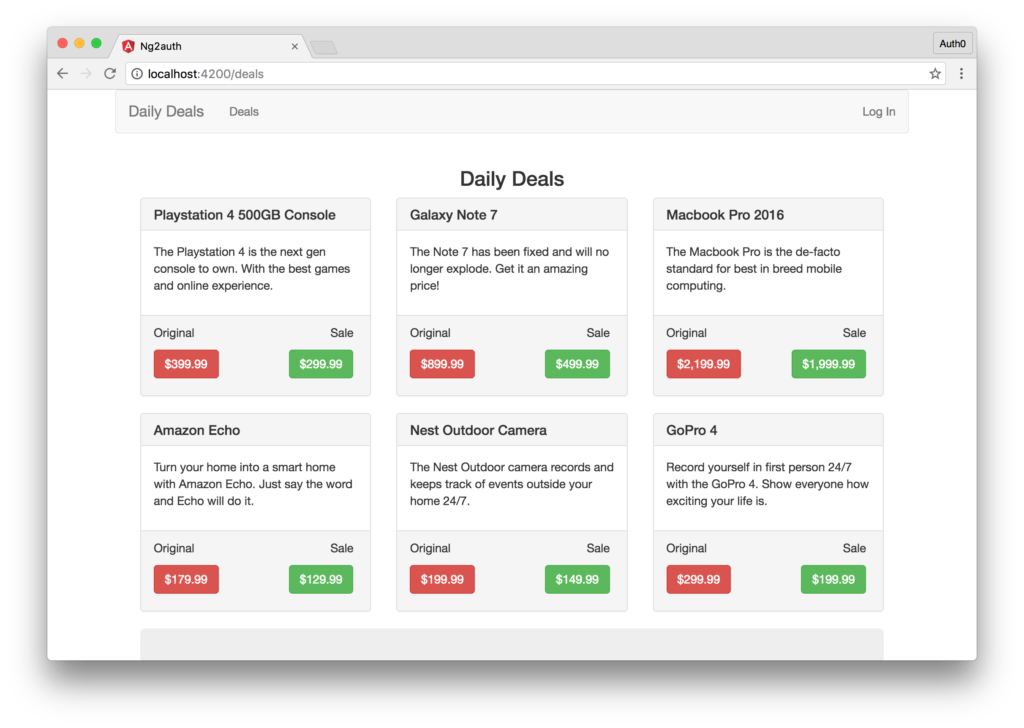 We’ll have to get our daily deals from somewhere. Let’s build a very simple Node.js back end to serve the deals. We’ll have a publicly accessible route serving public deals and a protected route that can only be called by authenticated users. For now, we’ll make both of the routes public and worry about the authentication piece later. Take a look at our implementation below:

Both our server and the Angular app we are building will require Node.js and NPM, so be sure to have those installed before continuing. Check out the GitHub repo to get our list of daily deals or create your own. The model for each deal will be as follows:

One of the best ways to start building a new Angular app is with the official Angular CLI. The CLI can take care of scaffolding the initial app, adding additional components, takes care of the build system and much more. In this tutorial, we’ll scaffold our initial app with the CLI.

If you don’t already have it installed, run:

This installs the Angular CLI globally. We’ll interact with the CLI using the ng command. To create a new application, choose a directory and run:

This will create a new Angular application with routing and no initial test files for the root component. The app will be created in its own folder in the current directory, and the CLI will download all of the required npm packages and basically set everything up for us.

Once ng new is finished, enter the new directory and run the ng serve command and the Webpack based build system will take care of compiling our app from TypeScript to JavaScript and will serve our app on localhost:4200. The ng serve command will also kick off a live sync process, so any time we make a change our app will automatically recompile.

Let’s head over the localhost:4200 for now to make sure that everything is working as expected so far. If you see a message saying “app works!”, you’re golden. Next, let’s examine how our Angular app is scaffolded.

The app directory contains the bulk of our application. By default, we’re presented with the following files:

Note: g is a shortcut for generate, and c and s are shortcuts for component and service, respectively. Therefore, ng g c is equivalent to ng generate component. The --no-spec flag indicates that *.spec.ts files should not be generated. The --it and --is flags stand for “inline template” and “inline styles” and --flat indicates that a containing folder should not be created.

We’re going to be making HTTP requests to our API in our Angular app. To do so, we need to add the correct module to our app.module.ts file. Let’s do so now by importing the HttpClientModule and adding it to our @NgModule’s imports array like so:

We’re going to use Bootstrap to style our application, so let’s include the CSS in the <head> of our index.html file like so:

We’ve created our root component. We added an inline template and some inline styles. We haven’t added all the functionality yet, so every user will be able to see all the links and the login and logout buttons. We’ll wait to implement those a little bit. We’re also displaying the <router-outlet> element. This is where our routed components will show.

Since we initialized our app with the --routing flag, the architecture for routing is already set up for us. Let’s update it so that our Deals component shows by default. We’ll also set up all the routes necessary for our app.

Open the app-routing.module.ts file and add the following:

We can just navigate to localhost:4200 in the browser and see our app displayed. We won’t see much yet, just the top navbar and a message saying that the deals component works.

For our app, we’ll create one such type. In the deal.ts file, we’ll define a type of Deal. Let’s see how we’ll accomplish this.

Now we can declare objects in our Angular application to be a type of deal. These objects will gain all of the properties and methods of the deal type. We’re only defining properties here; we won’t have any methods.